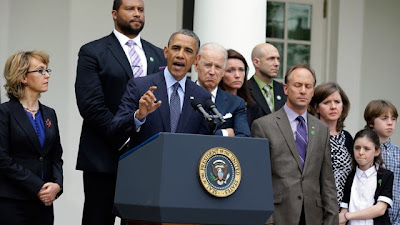 In a bi-partisan vote the last surviving remains of the Sandy Hook Aftermath Panic Gun Control Act had the plug pulled.

The Bill was defeated as well as all the amendments.

Did you see the press conference? He had a tantrum over this piece of bad legislation? The biggest question I have today is why was President Obama more upset about this than the terrorist bombing in Boston?  Maybe it was all the tens of millions of dollars that was wasted by flying Sandy Hook families around on Air Force One so they could be trotted out to be on display as people danced in the blood of their children. All for nothing. I don't think that's it. Because wasting money if a favorite hobby.

Look at the face on Joe "shotgun" Biden. He might turn into a muppet soon if he gets more frowny.

They took their best shot. They got our attention. Time for us to get busy. Time to join the NRA. Time to write your representative to thank them or to let them know that they have lost your vote and you are going to make sure everyone you know will be voting against them next time. Because now we know who the Death-Eaters really are.

I am going to stop leaning on all the people that are now crying in their coffee. No more talking past the sale. They will be distracted soon by something else. Illegal Immigration is my bet.

Does this mean it's time for Piers Morgan to GTFO?

Well, 3 of them were already "Occupied", but you get the Picture.

So we shall see what the next Election Cycle brings, eh?

But Senator Toomey better be updating his Resume.